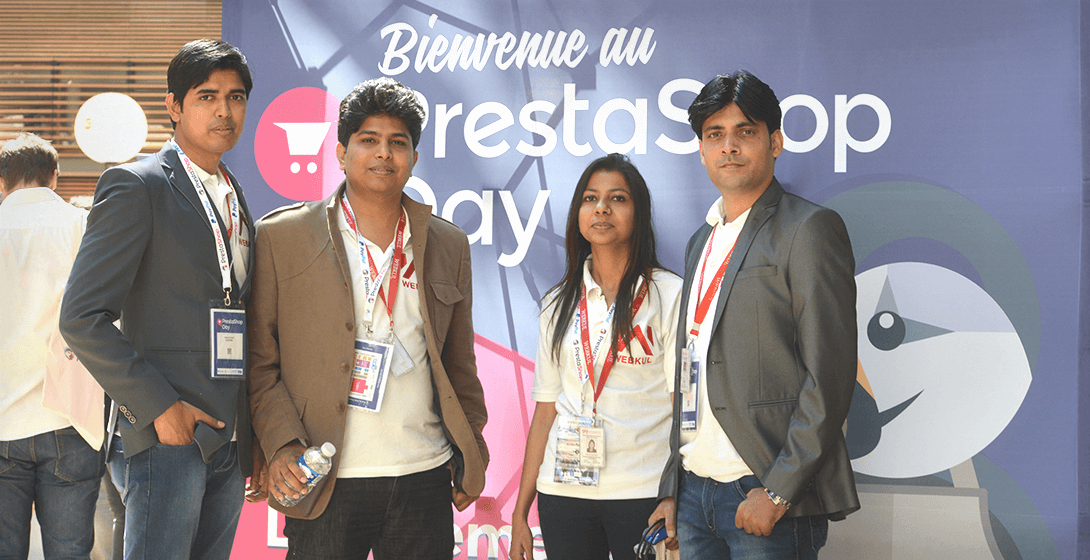 We landed in Paris about 8 O’clock in Evening & if you are new to Europe , First thing which would surprise you is sunset time .Especially in summer ,Sun set at around 10:30 PM and Sun rises at 6:00 AM . That was very surprising for us too.

About 9:30PM we checked in to Hotel Altona which was quite near to Gare du Nord Metro Station. We visited nearby restaurant for Dinner,Finding Veg Cuisine in their menu was really difficult. Thankfully! We met an Indian Girl at Restaurant & she was working there. She helped us a lot to choose veg dishes.

We came back to our rooms because it was time to plan for the Next Day. Our two topics “Marketplace & ERP” got selected for Barcamp Prestashop day. We prepared ourselves for that.

Conference got over in evening. So Now its time to explore New Country .We all were very excited for that. About 7:30 in Evening we Visited “sacre coeur” Church which is located at Central Paris. Sacre Coeur was built in 1870 using Travertine Stone. We were mesmerized by the architecture & whole environment .

After that we went to nearby Street Market , surprised by finding lots of Indian shopkeepers , bollywood songs were playing in shops . It was dinner time . surprisingly we found an Indian Restaurant & had Indian Dishes at Paris “Joy of finding Home food in foreign Land”.

Next Day [12th June 2015] :
Whenever we visit foreign Countries for official work. we keep one day Extra to explore new city.
All of us already planned for the day But Paris as one of the top most tourist destination , one day was not enough . We planned to cover “Arc de Triomphe” and of-course “ Eiffel Tower” .
We caught metro from “Gare du Nord” to “Charles de Gaulle”. “arc de triomphe” is very near to metro station .
Arc de Triomphe was built in honor of martyrs , fought and died for France in the French Revolutionary and the Napoleonic Wars. It have very symbolic emblems .

Distance between “Arc de triomphe” to “Eiffel tower” is around 2 Km. It was really awesome to walk on Paris Street. After half an hour walk we reached to Eiffel Tower. The Eiffel Tower is an iron lattice tower located on the Champ de Mars Central Paris. We visited during the day time But would suggest you to visit at night. View after sunset is splendid.

We visited eiffel tower’s first floor which is transparent floor and its new glass balustrades & had a breathtaking experience. If photography is your hobby then second floor of Eiffel tower would be perfect place for you. You can take some fantastic photographs of plunging view of the ground, as long as you’re not scared of heights.
At the top you’ll be rewarded with a stunning view of Paris and its monuments.
Explore Gustave Eiffel’s office which has been restored to its original condition.

Paris is city of Bridges. During evening time we visited Pont Des Arts bridge & got to know a sweet & surprise story. This bridge is known as Love lock Bridge. Localities, tourists write their sweetheart’s name on lock & lock that on bridge to show their love & affection.

We explored Paris’s Famous shopping streets.
Avenue des champs elysees is the most famous shopping point across Paris. This place is very large and offers a nice view.The stuff there was as diverse as the crowd roaming around.
Rue de Passy street is located in “classical chic” area of Paris. This is a one way street, quite narrow but long enough to be tired of shopping at the end.

13th June Boarded in Air India flight to come back to Delhi with Amazing & awesome experience of Paris.