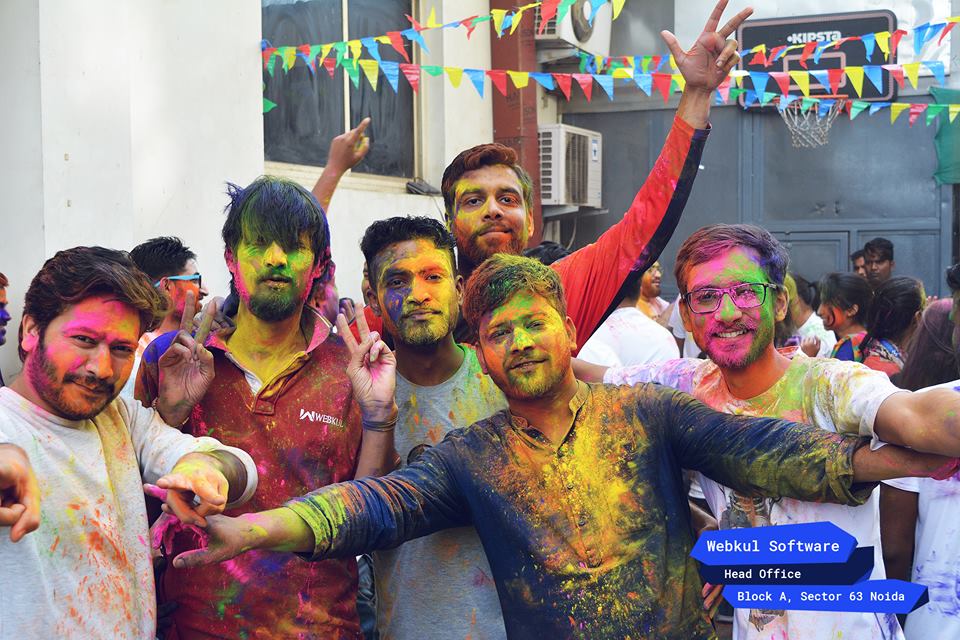 Holi is considered as one of the most revered and celebrated festivals of India and it is celebrated in almost every part of the country. It is also sometimes called as the “festival of love” as on this day people get united together forgetting all resentments and all types of bad feeling towards each other. Being a part of Indian society we also celebrate Holi with full of enthusiasm and excitement.

We selected 16th March 2019 as Webkul’s Holi Day and started at 11:30 AM with a warm-up game named as “The Laughing Game” in which everyone had to say one by one haa-haa, hee-hee, hoo-hoo who laughed first will be eliminated and who remains the last will win. This game brings laugh in the air and everyone was literally rolling in the aisles.

The next game was “Junk In The Trunk”, where a box filled with tennis balls were tied to player’s waist and they were asked to hop in accordance to empty the box, the techniques used by the player engaged the audience captive. To enhance the team building activity and communication within the team members we came across with total innovative game idea which rolled up our another interesting game, Pass And Pass, where a rail of 20 people in a row were asked to align and to the first member a gesture was explained and now he had to communicate with the person next to him, now this kept on going till the last member of the rail. It was really amazing experience to observe how things get changed over the rail and people.

The event was getting crazy, where ‘Roar And Bark’ worked as wonders which appealed all the participants to produce peculiar voices of animals according to their chits offered and they had to find their mates to hit the winner bong, it was insane to find all those serious faces in this crazy aura. It was well spent day.

We couldn’t stop the fun where we wrap-up our event with dancing, singing, selfies, and throwing gulal in the air. We had turned the whole environment in that way which gave crazy vibes to enjoy and eat. Everyone on the floor enjoyed gujhiya, thandai and were dancing on the dhol-tasha beats because without these things holi is incomplete. Continuous laughs, rocking floor, and delicious food made the event more exuberant and vivid.

Beats and bounces marked its presence at the utmost peak. Smeared pink, green and red faces made it really difficult to recognize anyone but who really cares when everyone is celebrating their moments.