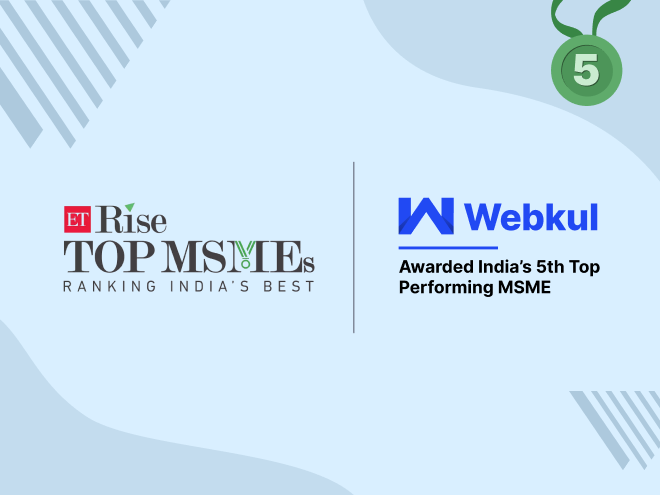 Webkul is a capability-based organization crafting several technical products. It has lead to reform in the IT industry for 10 yrs. With the rise of 97.5 percent, Webkul ranked 5th in the ET Rise 2020 India’s Top-Performing MSMEs (Micro, Small, and Medium Enterprises).

The Economic Times Digital introduced a ranking of India’s top organizations who have dominated and set a benchmark for different organizations to follow. The MSME area in India is the second biggest occupation maker in India.

The program expects to praise the great work done by the organizations in this area. The program will be an acknowledgment of rousing organizations that are making another and enduring format for success. Start to Celebrate the Success of Indian MSMEs.

Everything began with an application for the Economic occasions computerized declared that they are congratulating the top MSME in India based on development, Financial development, and Performance under the three classes:

The MSME area in India is the second biggest occupation maker in India and the program expects to praise the great work done by the organizations in this area. The program will be an acknowledgment of moving organizations that are making another and enduring format for progress.

We documented our assignment for the “India Top Performing MSME”. After getting the numerous passages from everywhere the India, Economic occasions in relationship with a portion of the brand name resembles Caspian obligation, cogoport and assessment accomplice “Care Ratings” assess the sections based on previously mentioned models.

Because of the pandemic, The financial occasions held the online felicitation service. The felicitation function began with the prologue to the program and significance of the MSME area in the Indian Economy.

The service started with the feature from the CEO of Niti Aayog Mr. Amitabh Kant. Further, Mr. Kant asserted that the MSME area is the foundation of the Indian Economy. He additionally said that the administration is making some significant strides for the MSME regarding better credit and Infrastructure.

After Mr. Kant’s featured Speech, discussion among the Officials of Union Bank, Caspian Debt regarding the Financial Support given by the Banks, NBFC’s.

Finally, the most anticipated honor service began and numerous similarly meriting organizations got the honors in their particular classes. For “India’s Top Performing MSMEs“, Webkul is positioned fifth by the ET Rise based on our yearly financial growth and performance.

Webkul expresses sincere gratitude towards ETRise for recognizing our efforts and contribution to the country’s economic development. With constant awards and nominations, Webkul feels more motivated and excited to work to deliver recognizable achievements each year.