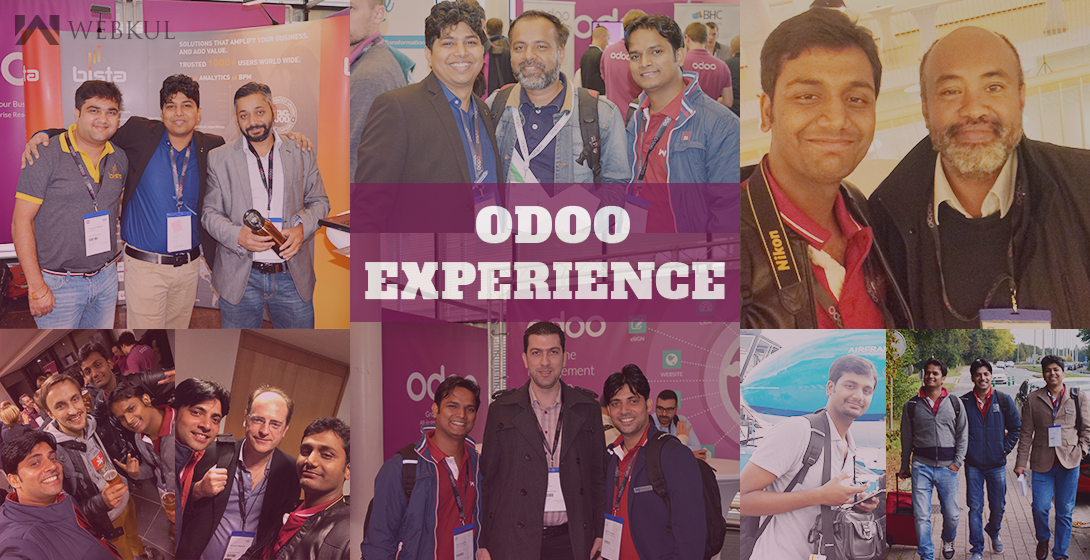 It has been an amazing experience at Odoo Experience 2016 held at Louvain-la-Neuve, Belgium. Odoo Experience was a 3 day event which witnessed the unveiling of the brand new “Odoo 10”. It was not limited to just the unveiling, it also included various technical talks based on security enhancement, new feature additions both visual and code based and various marketing and management strategies in Odoo.

We as “Webkul” being an Odoo partner and technical enthusiast were scheduled to attend this event from October 5 to October 7, A team of four people Vinay, Ravi, Mohit and Shyam(me) had to attend this event with an expectation to learn new skills which we would involve in our current product development cycle, meet new people and broaden our reach to the rest of the world. And I am very much certain that our expectation was much more than fulfilled. Vinay and Ravi were also going to showcase our attempt to integrate IOT in Odoo and one of our sales promotional app.

We flew from India on October 3 and arrived at our destination Louvain-la-Neuve a day prior to the start of the event. By the evening we had figured out the exact event place on our short explorer walk. On the next morning our countdown ended and the much awaited event was on it’s way.

Day 1:
It began with a bang! with Fabien Pinckaers(Founder of Odoo) unveiling the new Odoo 10. A new user friendly interface with integrated mobile app, odoo studio were few of the long list of new features added in the version 10 of Odoo. With new Odoo Studio everyone is blessed with the power of an Odoo developer. You can customize any view or any report, with power to add new fields, new views, new reports. Even a person without any technical knowledge can do these modification with ease.

After this various talks started in parallel and it would have been indeed very difficult to choose one talk from so many if we were unplanned. Luckily we had already made our schedule for which talks we would be attending and we went as per our schedule. We got to meet new people, some of them were technical enthusiast as we were and many of them were our reputed customers. It was really amazing that every third or fourth person we met was somehow related to Webkul, either as a direct customer or as service provider using our apps.
In the evening Vinay had to present our talk on “IOT with Odoo” and it was really worth applauding with the overwhelming response we received in context with this talk.
After whole day of attending various talks meeting new people it was time for the “Odoo Band” and “Barbecue & Beer Event”. Band was awesome! They just rocked the whole place. In the “Barbecue & Beer Event” we met some more people and our selfie sessions continued till the end. We returned to our hotel in a jovial mood and prepared for the next day of the event.

Day 2:
It also began with multiple talks in progress at same time.This day was mostly dedicated to the technical stuff in Odoo and the talks from Olivier Dony on “Security: 10 rules for safer code” , Antony Lesuisse on “Performance in Odoo 10: how we made Odoo up to 10x faster” were enlightening. These really made our day.

This day also met many new faces with some familiar ones amidst them. Met many of our present customers who extended their best wishes to us for our future and discussed their future plans. The day ended with “World Buffet” for the attendees with a variety of food across different regions.

Day 3:
Last day of event and it was going to be short. For us it began with “Ask Fabien Anything” where Fabien Pinckaers had answered various questions from the attendees. On the same day Ravi had to showcase our product “Website Collection Pages” and he did a fabulous job in explaining other people that how they can boost their sales with our product in very simple steps. Event ended after the lunch leaving behind a lot of new and unique learning experience for us.

As the event ended we were eager to explore Belgium. We had already planned a day and half for this purpose. Initially we began with “Hergé Museum”. Great to know how the detective Tintin and his dog Snowy came to existence. Next day we moved to the city of Brussels and visited “La Grand Place”,a place listed as a UNESCO World Heritage site and it was indeed worth visiting. This place was a perfect example of neoclassical architecture. Our other destinations included “St. Michael and St. Gudula Cathedral”, “Royal Palace of Brussels” and “Manneken-Pis” which serves a national symbol.

Halloween was approaching and we found all the shops, malls were flooded with the cool costumes and and goodies. So we decided to try few of them.they were too good! As Indians we are addicted to spicy food but for past one week we never had the opportunity to serve our taste buds with the hot and spicy curries. It was indeed a lot of joy for our taste buds when we found an Indian restaurant near the “Grand Place” serving ‘samosa’ and ‘chicken tikka’. Their food was really nice and really had the authentic Indian taste.

After almost two days of exploring Brussels we boarded the flight back to New Delhi from Brussels. With a total travel time of 14 hours we arrived back to our homes with many new learning from the Odoo Experience and numerous happy moments we come across while our journey.