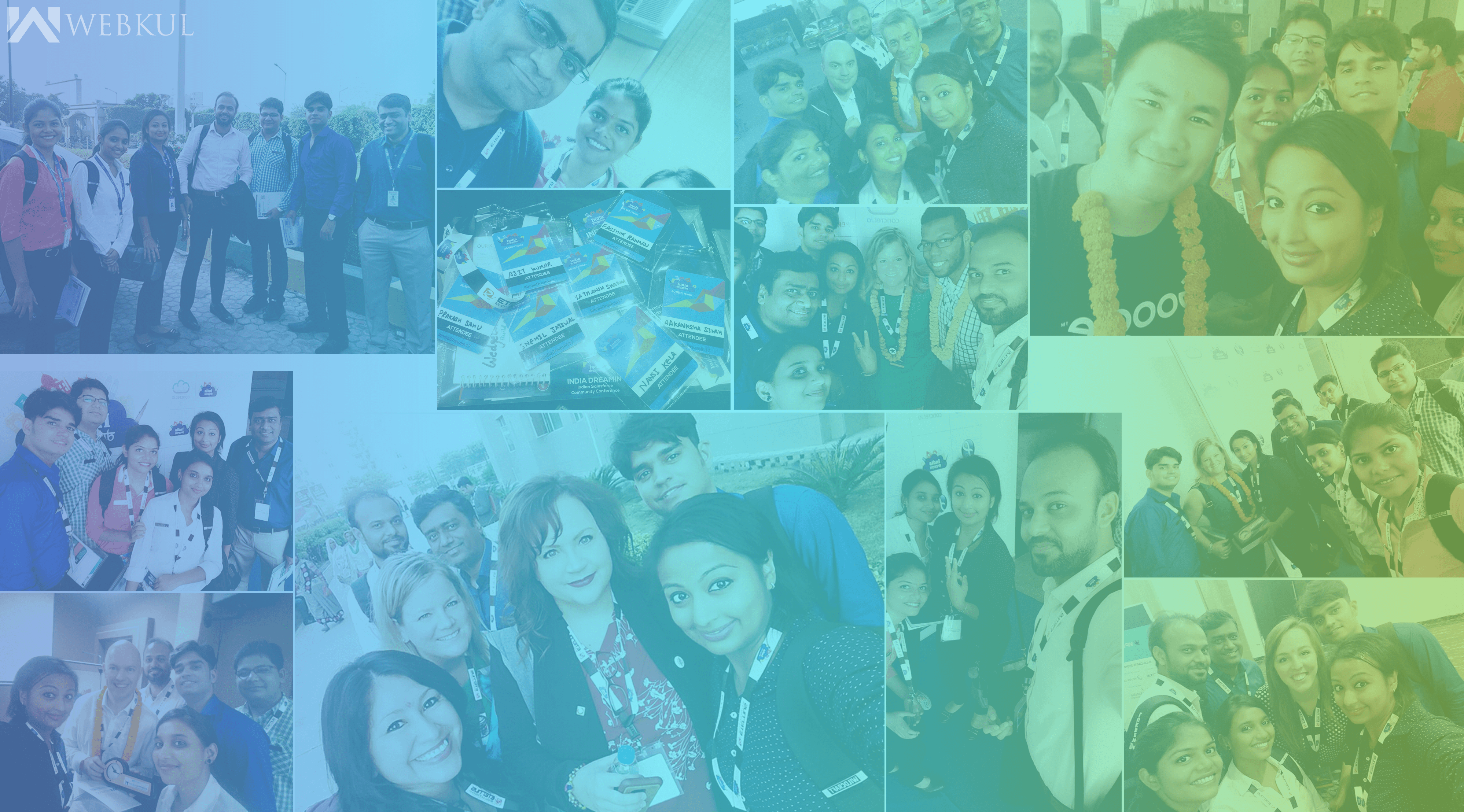 India Dreamin is a community-led, community-run event for professionals around Salesforce. This event was organized on 30th Sept 2017 at GL Bajaj Institute of Engineering & Technology, Knowledge Park III, Greater Noida. Nothing could have been a better venue for this event as it attracted a large crowd of youth and professionals gather at one place.

India Dreamin added another chapter in the glorious history of Webkul. It was not just an event, it was a memory that would remain forever. We could not have written a better script than this. We as a team left no stones unturned to make every moment a long-lasting and memorable one. Although, if we talk about the Salesforce Team of Webkul, it has just been two years since we have come into the picture, it is still in its growing phase, however, this event would certainly make a difference as far as our recognition in Salesforce Partner Community is concerned.

We were excited about the event right from the day, we got ourselves registered for this event and started off quite early in the morning around 7 AM as we had to reach the venue by 8 AM. We had never thought we would get the opportunity to have a live encounter with the Salesforce MVPs.

We reached the venue by 8 AM as per the schedule and headed towards registration counter. We were warm-heartedly welcomed by the hosts and got Indiadreamin T-shirts for every member of our Team during the registration. Then we moved towards the auditorium where the welcome ceremony was about to take place from 9 AM onwards.

The welcome ceremony started with a Ganesh Vandana which depicted the symbol of Indian culture and it was overwhelming to see the Salesforce professionals outside India watching the Indian culture with such a keen interest.

It was followed by Pre Keynote and Agenda Walkthrough. Joshua Hoskins (Salesforce MVP) started the proceedings with his warm welcome to all the spectators out there and later he called Jim Carbone. (VP at Marsh ClearSight ) on stage, and it was good to hear good things about Indian culture and food from him. He really loved the spicy Indian cuisine and expressed his desire to stay in India forever. Then after, the event started off with a welcome speech of Holly FireStone, ( Director of Community Salesforce).

Then, there was a break of half an hour when we got together again and wanted to utilize it to the fullest. In the meantime, we met Amy Oplinger (Sales Cloud Consultant, Salesforce MVP) accompanied by Stephaine Herrara (SFDC WIT Leader) and she was delighted when we presented her the goodies, she really loved the present from our side and now it was a selfie time for us and she was equally keen in getting clicked with us. Angela Mahoney,(Force.com MVP) was also present there and we took a group snap with her as well.

Now, it was time for David Liu (creator of SFDC99.com) live session where he was talking about how to get a Job at Google and other top tech companies. This session was an eye-opener for all those who want to learn the basics of Salesforce Development and build their career in this. He has one of the greatest success stories in the history of Salesforce. We had a photo session with David Liu as well after this session and it was a WOW moment for all of us. He is an inspiration and a role model for thousands of Salesforce Developer.

Then came the thrilling App Demo Jam event which was hosted by another Salesforce MVP Joshua Hoskins who was full of energy and humor and there were three out of all the sponsors who got the opportunity to present their application in front of the spectators in 3 minutes. The three sponsors were Code Robot, Apttus, Make Postive and the best demo was decided on the basis of the audience vote. They got a chance to showcase their app in just 3 minutes and it was Apptus who won the best App Demo Jam award for his wonderful application X-Author which was all about the integration of MS Excel data with Salesforce.

Post lunch, we had decided to attend Phil Walton’s session, whom we all love for his wonderful feedbacks for the free apps on AppExchange. He has also positively reviewed one of our Salesforce Application ‘Smart Multi Weather Information’. The session of ‘Salesforce Freebies’ was quite a learning experience for all of us followed by questions & answers round regarding the marketing strategy of free Apps where Phil himself answered every question raised by the audience and also awarded the ones who answered his questions.

Then it was a time for a short break during which we went to the exhibition of the applications organized by different sponsors(ISV Partners) in the college campus itself. We had a word with few of them with an intention to collaborate with them and they responded quite well by sharing each and every detail they could in order to have a collaboration if needed in future. We also got goodies from them. Our developer team also participated in quiz competition organized by one of the Sponsors. We took part in all the sessions we could.

After the quiz competition, there was another session by Emily Hudson, Product Manager, Salesforce Appexchange. This session was exclusively for AppExchange related ideas and queries. This was also a learning experience for all the ISV partners out there. We also attended the panel discussion with few of the directors of the sponsors and listened to their success stories.After the panel discussion, we walked up to Emily Hudson and greeted her with the Goodies we had and she was overwhelmed by our present and we had a photo session with her as well.

It is often said ‘The best is reserved for the last’. So was the case here. Before the Sponsors and VIPs went for dinner, a cultural event was scheduled as well. After back to back sessions, it was time for some fun. The cultural events started with Indian folk dances like Bhangra, Garba and Western hip hop as well. There was a number of mesmerizing performances by the students of GL Bajaj Institute of Engineering and Technology. This shows their degree of affection towards Indian culture.

Last, but not the least we met Vinay Chaturvedi and Shivanath Devinarayanan who were the co-founders of the Event. India Dreamin won’t have been possible without these two as they were the real pioneers of this event. It was a pleasure to meet them and we owe this event to these two Salesforce Champs.

Although, we wished this Mega event to keep going, however, we had to make our mind that it’s time to say goodbye to the people out there and return home. The India Dreamin event may have concluded but the memory would remain forever. While signing off, we must say the mega Event India Dreamin proved to be a dream come true for all of us.