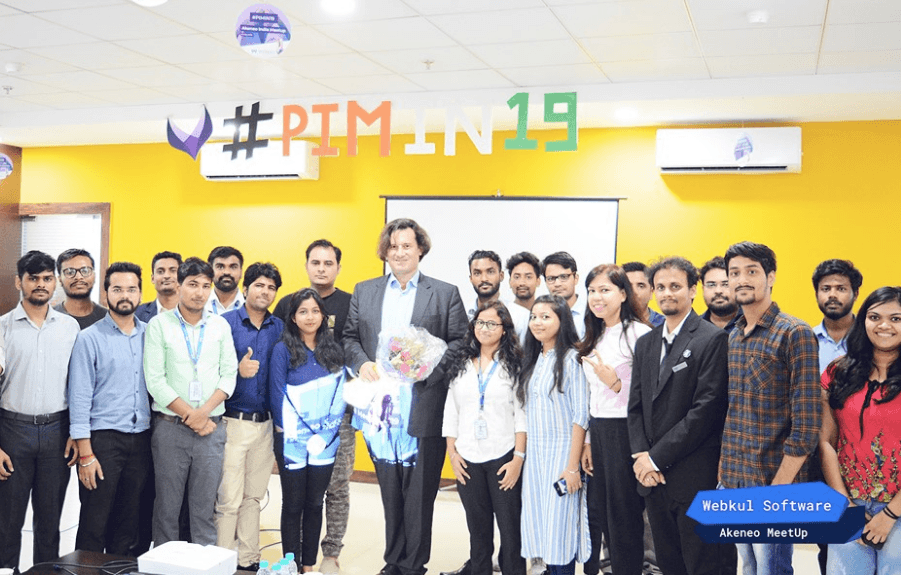 On the 27 July 2019, the first-ever Akeneo India Meetup organized by Webkul at its premises.

We organized the first-ever Akeneo meetup in India and got a massive response from the Akeneo community. There were many participants from the developer community, Business enthusiasts, and eCommerce shop owner.

After months of planning and preparation, finally, the day came. The event was very special to us. Everyone is excited to listen to Guest speakers as well as our speakers.

The event was open for all the participants who want to learn about the Akeneo and its future scope and the technologies behind the Akeneo.

We were quite nervous and excited before starting the event. But all the nervousness turned into joy and pride when we have found the presence and confirmation of Mr. Fred De Gombert (CEO, Akeneo).

We had furthermore speakers from Akeneo who were going to deliver the talk about Journey of PIM and Akeneo tech stacks.

The CEO of InBetween Mr. Alexander Dressler make the event more successful with his presence at Webkul premises. He reached at Webkul before starting the event. He was so much excited about the event.

At Webkul, Mrs. Prachi welcomes our guest Mr. Alexander with the flower bouquet. Although, it was a better day for us and we have captured all these beautiful never-ending memories with the Camera.

The event is started with a welcome note by Mr. Saurav Pathak(Business Developer at Webkul). He told why we have arranged this event and what we are going to do in this event.

Finally, our host for the event Mr. Rahul Piwal start the event and by sharing about the significant accomplishments of Webkul and its journey. He introduced Akeneo and explain the Webkul achievement in the Akeneo.

Here are the furthermore topics that covered in this event:

After the introduction about the Webkul and event, our host announced for the Mr. Fred talk. Everyone is excited to listen to Mr. Fred(CEO of Akeneo). He started his talk with the word “Namaste” in Akeneo India meetup. He praised the contribution of Webkul in Akeneo for making modules in different domains.

Mr. Fred told about the Akeneo that it is the most running open-source PIM platform in the World. There are 60k+ users live users of Akeneo who is maintaining their products information with the Akeneo PIM.

In the end, Mr. Fred said Thanks to all!! and also ensures that he will be available in the next meetup.

After Mr. Fred talk, our host announced for the quiz round. We Had arranged the quiz round after each talk. In the talk, the participant had a chance to win some exciting goodies.

Most of the participant gets involved in the quiz and won the goodies like T-Shirt, Pens, Stickers, and chocolates. We have also captured this moment in Camera.

After that, our host announced the next step in the meetup. He called our next speaker Mr. Adarsh Shukla to represent his topic “Journey of PIM and its future scope“.

Mr. Adarsh Shukla explained all about the Journey of PIM and its future scope. This talk was very informative.

After this, we had organized a quiz round. Now our host of the event announced the next talk of Mr. Alexander Dressler (CEO, InBetween). Everyone was excited to hear Mr. Alexander at Webkul premises.

He was going to present all about the “How to publish with Akeneo using InBetween” in first Akeneo India meetup. In his presentation, he shows how can we connect Akeneo with Adobe Indesign and how can we export the product from Akeneo.

Print extension is specially meant for managing and exporting data for print catalog data, magazines, brochures, leaflets, or any other print material.

Finally, the attendees had some questions and Mr. Alexander replied and explained well.

After the break, we moved to our next steps. Now, our host announced for the next presentation of Mr. Salvatore Accaputo(CEO, EIKONA/Tessa).

He was going to represent “Tessa Integration with Akeneo” in first Akeneo India meetup. Tessa is a digital asset management software for storing digital asset like images, videos, files, and others.

After Mr. Salavatore presentation, we had arranged a quiz rounds again. The attendees get another chance to win the goodies.

After this, we have another presentation from Akeneo. Our host announced the next presentation of Mr. Benoit Jacquemont(CTO and co-founder) and Mr. Romain Monceau(Akeneo Lead developer/Technical Consultant) who were going to represent “Job Queue Stack in Akeneo“.

It was a combined presentation by both the speakers. This talk was very beneficial for the attendees who work on the Akeneo. They can easily understand “how the Export job queue stack” works in the Akeneo.

Finally, the moment came for which we are waiting curiously. Our developers were going to present their topics in the meetup.

Our host announced the name Mr. Navneet Kumar(Software Developer at Webkul) for the next presentation. Everyone was excited to listen to him because he is leading Webkul Akeneo department.

He represented the topic “How to implement Asynchronous and Bulk API“.

Mr. Navneet Kumar included these points in his presentation:

He shared very knowledgeable information and working of the API request and response in the Akeneo.

Now, the next presentation of our Akeneo developer Mr. Aman Srivastava(Software Developer at Webkul). He was going to explain about “Akeneo best practices“. The presentation was very important for the developers who are working on the various PHP framework like Laravel, Symfony and want to follow best coding practices.

It was a very informative topic and beneficial to the merchants as well as business enthusiasts who were running their eCommerce shop in different languages and want to manage it from one place.

Mr. Firoj included these topics in his presentation:

Now it was the time to say goodbye and distributing the goodies among the attendees. Our host called Mr. Alexander for the Momento session.

Mr. Alexander came on the stage and praised the way we have organized this meetup. Mr. Saurav Pathak gives the Momento and T-shirts to Mr. Alexander.

Finally, we captured the moment of all the attendees and the speakers in a single frame.

Thanks, for the contribution of all the sponsors!!! without them, this MeetUp was not achievable.

Thanks to everyone to make it successful!! We got positive responses from all our Attendees. We are also planning to continue this trend in the Future.