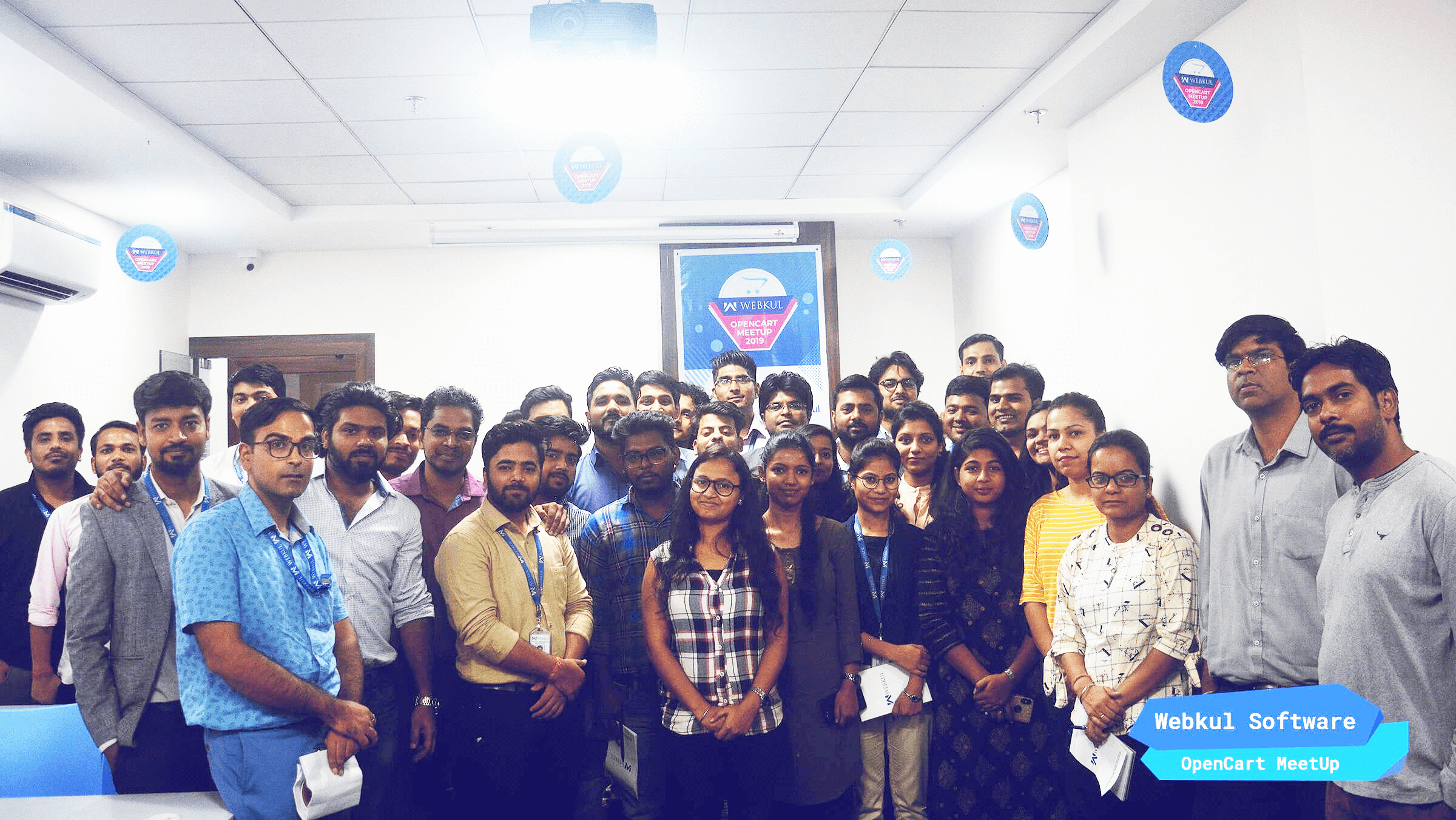 On 29 June 2019, the first-ever Opencart MeetUp was organized in India by team Webkul.

The event was special to us, so was the day aka National Camera Day. I mean what’s better for an event to be held on the day when there are a camera and spotlights all around.

The event was an open invitation for all of the candidates willing to learn new and future tech in the Opencart eCommerce world. The Opencart Meetup will focus on the eCommerce industry, tech stack, and best practices used in the Opencart Development.

Many people from the Opencart Development Community, Business Personnel, and Merchants who worked for the society actively participated for the attendees and marketed up their presence on the meetup page.

Then finally the day arrived, we were so excited and nervous at the same time about the preparations as the community was showing their presence on the Meetup day.

But the nervousness turned into pride when we got the confirmation from the creator and founder of the Opencart Mr. Daniel Kerr, who agreed to show their presence at the Opencart Meetup.

Our host for the event Mr. Nishad Bhan started up the event by sharing about the significant accomplishments of the Opencart in the past couple of years. With the current opencart website users turning more than three lacs globally.

Some of the topics on which the speakers spoke were mentioned below:

2. Get to know the usage of Console

3. Multi-Channel and headless the future of CMS

After the introduction, the MeetUp’s very first speaker Mr. Mangesh Kumar Yadav stood up to enlighten us regarding the Opencart Code Optimization.

The brief description of how we can optimize the codes in the opencart, dodge repetitive codings in various scenarios like breadcrumbs take for instance.

The presentation ended well with the quite a scoop of the knowledge given to the young passionate developers.

Mr. Nishad took the mic and shared us the name of the next speaker for the day that was Mr. Prabhat Kumar Gautam who choose the topic of Console and shared the knowledge about how we can automate the opencart installation, module creation, clearing the cache files and database import/export via console commands.

Things got real when a demonstration was done on the Live Demo to explain the console functionality.

The knowledge express didn’t stop there only as Mr. Abhishek Oberoi shared the next topic on Multi Channels and headless. It was quite an exciting topic.

I must say with the different channels shared and how we can upscale our business was quite interesting to knowledge for all the merchants and business personnel that attended the meetup.

There was a description as to how a traditional Opencart CMS differs from a headless or decoupled CMS.

Then came Mr. Dilip Kumar Yadav who spoke about Headless PWA and React js. He explained to us the terms like the PWA, Service Worker, and Manifest which sounded mind-boggling but was explained so well that business personnel stood and queried a lot.

Further, Mr. Dilip shared us as to how Webkul contributed to the Headless PWA and their recent developments.

Mr. Nishad came back to the stage and thanked Mr. Dilip for his knowledge share.

Then finally, the time arrived which we all were waiting for Mr. Daniel Kerr was available to share his view through the web share.

The man of the hour was here with us, and he started with the generous gesture of thanking us for using Opencart.

He shared how the journey of him and Opencart began in February 2005 and was there in Hong Kong for the past four years.

Mr. Daniel Kerr, a passionate developer, worked on his first ever website based on OsCommerce and created nearly about 15 ecommerce website in less than a month.

Sooner he decided to work on his own CMS as a personal project after job worked over it on every night for a couple of years and finally got the first release onto Google Code on 10 February 2009.

Daniel also shared with us their current project that they are working on that is the Opencart Cloud and that they will soon be relaunching it.

Then Mr. Rahul Gupta thanked Mr. Daniel Kerr for sharing his experience and journey with the attendees of the meetup. The farewell was followed by the thundering of claps from the crowd.

The event got more interesting when Mr. Nishad started up a quiz session and fired some of the basic Opencart questions. The enthusiastic crowd actively participated, and the first person who spoke the correct answer was rewarded with the swags.

After the Q/A got winded up, there was time to bring up the next speaker of the day that was Ms. Sweta Som who spoke on Chatbots. The topic got interesting as we got to know about various types of chatbots like Stateless and Stateful.

I don’t know about you but knowing the first ever Chatbot Eliza. The Chatbot structure and the multiple Chatbot providing platforms where some worthy to note points.

The topic ended with the demo of Webkul’s very own Opencart Facebook Chatbot module explaining the crowd as to how a Chatbot functions.

The event took a turn towards more future and AI responsive tech when Mr. Govinda Mandal took a step forward to explain and share his experience and knowledge with Voice Commerce and NLP.

The idea to provide input to the system without the use of keyboard and mouse sounds fantastic right!!

Well, implementation done by Mr. Govinda on his local instance to demonstrate the voice commerce example was also quite a gem of the work out there.

The implementation of voice commerce in the Opencart can be done with the help of APIs like Speech recognition and Speech Synthesis.

NLP or Natural Language Processing which is the automatic manipulation of the natural language forms the basis for voice commerce.

We got to know the various application of the NLP like the Chatbot, Sentimental Analysis, and machine translation.

The topic was quite exciting, and queries raised like fire. One of which I can recall was by an opencart enthusiast who asked about NLP can be successful in India.

Where there are diversified languages and has a complex speech recognition to which Mr. Govinda reverted that there is still a long way to go in the area of voice commerce or NLP to recognize all the languages and their speeches and Webkul is working on it.

Mr. Nishad announced the break time. There were pizza and beverages for the attendees.

The Team Webkul communicated with different opencart community members and there where quite some interesting exchange of thoughts.

The break time was over now the turn of Flutter brothers, or I say the mobikul gems came on stage to speak up on the topic Flutter.

Mr. Manish Chaudhary introduced us to the topic and started with the demo of our Opencart Delivery Boy application to show us all how we can achieve a similar UI design for Android and iOS app using Flutter Framework.

Then He told us what issues we face while building an application using native development.

We got to know about the widgets and there types like the Stateless and Stateful.

We got to know many of the benefits of using the Flutter like it has a single Code base for both Android and iOS platform and Hot reloads.

He also shared us how Flutter and a native build application have identical performance basis.

The topic soon took over by Mr. Akash Gupta, who shared the various benefits of the Flutter Framework and compared React Native (one of the most popular frameworks) with the Google-created Flutter Framework.

The competition was close but flutter won the comparison by 6:4 ratio.

Mr. Nishad came on stage to announce our last speaker of the day that was Mr. Vikram Vashisth, and the topic that he spoke was on Opencart Security.

Security is the primary concern of the ecommerce market nowadays and one of the major threads that are usually faced by small eCommerce vendors due to their low Cybersecurity.

Mr. Vikram told us about detecting bugs, security tools (that will be used to identify bugs), and their remediation.

There were different data synthesized done by Mr. Vikram who shared us the possible threats or vulnerabilities that were detected in the Opencart ever since its Opencart version 1.5

Mr. Vikram shared some of the popular security tools like the Owasp Zap, RIPS, Burp Suite, SQLmap, and Kibana and explained each of them

He gave us three keys that are needed to be implemented for securing the modules or extension that was Validation, Sanitization, and Escaping.

The topic came to an end, and now it was time for us to say goodbye. The Attendees were shared notepads and swags. We captured the moment of all the attendees and the speaker in a single frame.

Thanks to the contribution of the Webkul, Opencart, and all the sponsors without them, this MeetUp was not feasible.

The Opencart MeetUp India 2019 was a success as we got to know by the positive response from the Attendees, and we are planning to continue this trend next year as well. 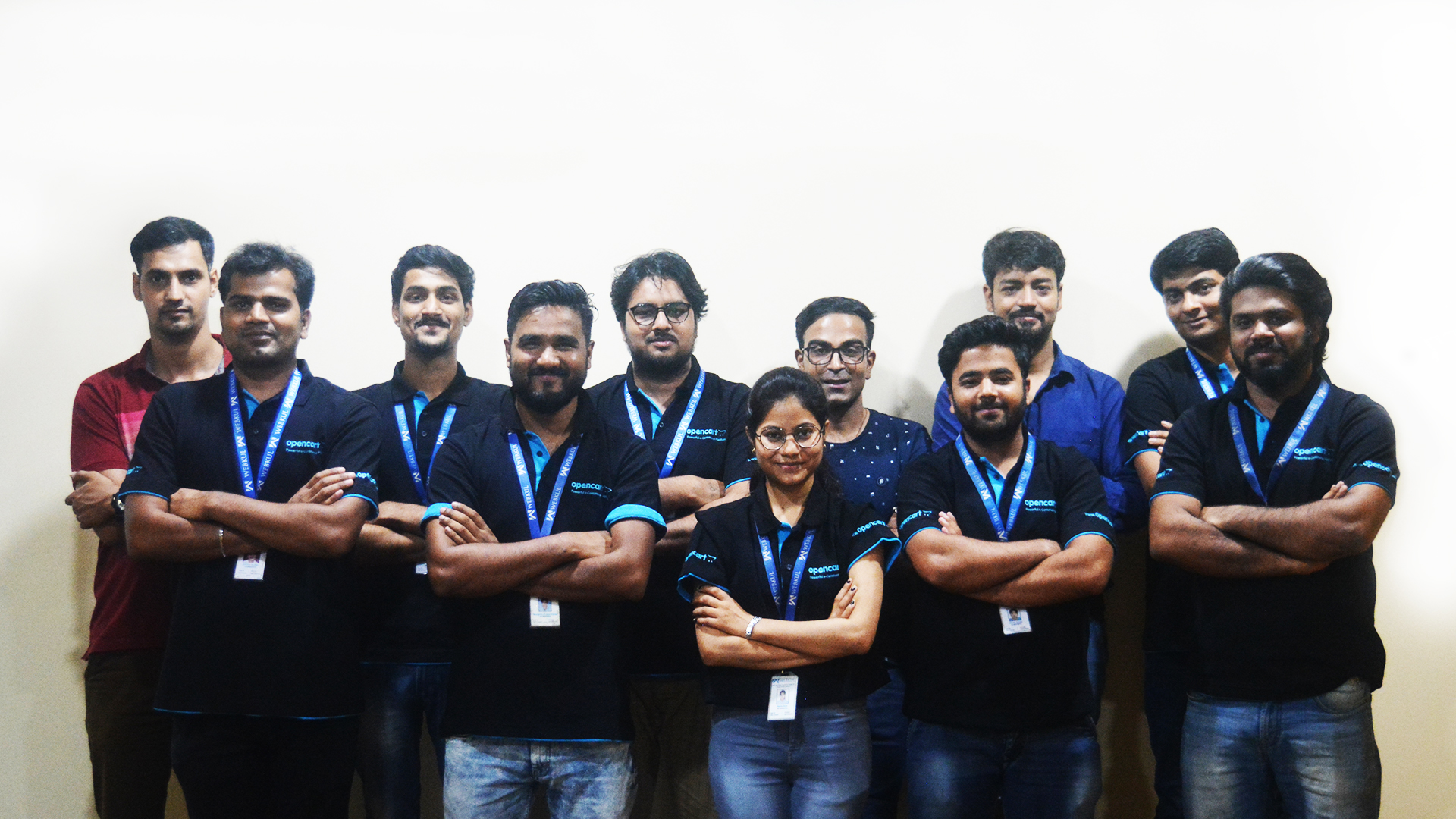