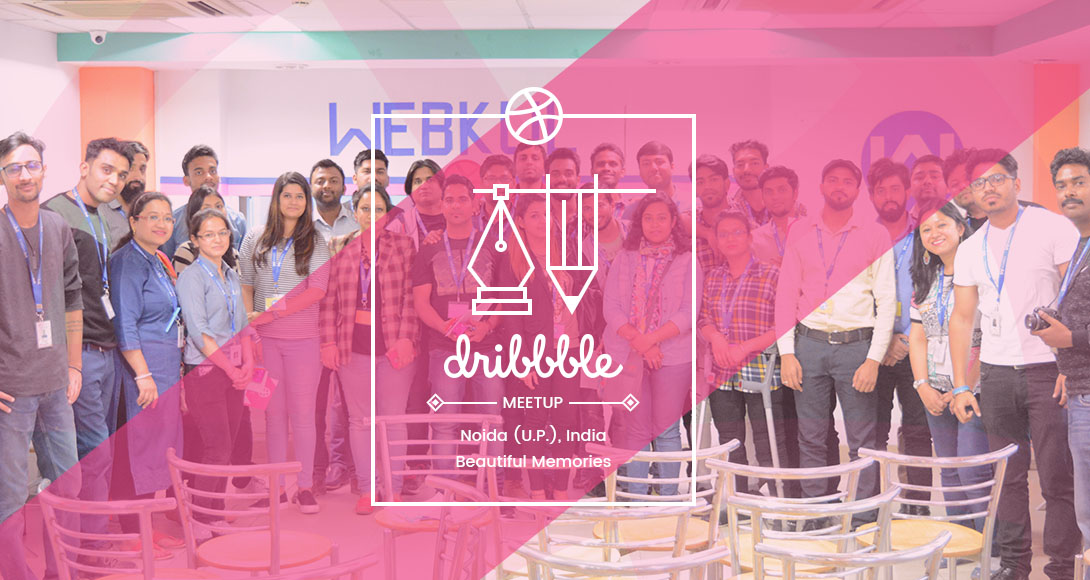 Last Saturday Webkul has organised a beautiful event for Designers and it was none other than Dribbble MeetUp 2017, The Purpose was to organise this event to Reducing the Communication Gap between the Designers from our Local Community. The preparation for this major event we have already started it couple of months before. We have started the event by arranging Playgrounds as we have announced before in the MeetUp Community so we can select wining teams. So, here are our all Playgrounds :

“Typo In The Bar” by Seema Rawat :

“Typo In The Bar” like the name suggests us that its related to the Typography or Typeface & Seema had self prepared all the playground’s needs like an example craft work which our attendees have followed while participating in this playground and the attendees have done really well.

In this playground, we did separated 6 Teams each team has 4-5 members and they had to create a Word with each letter should be in different typographic style. All the Teams has played it really well. Like we can see how much enthusiasm was there.

Our another member Pooja Vaish has hosted Paper Scrap in which all teams had to create anything from color paper sheets it was a kind of free style paper artwork. The main purpose was to organise the playgrounds was to encourage Team Work also and we have felt the same about on Paper Scrap event.

In this playground some of the teams were exceptional and so much exited that they have created some really beautiful creatives as we can see.

In this playground the attendees had to create some creative related to Web App User Interface but not on the system this time, by using paper accessories 🙂 well that was the surprise for them but all the team took its as a challenge and they have worked really hard to create their creatives, like the pics below:

Well who does not like to play games like Mario, Contra etc. and this time it was not easy that much because Tarun has planed something different from others, well of course it was an another craft work but related to new design pattern called “8 Bit” and this is how our wonderful attendees have performed.

“Show Your Swag” by Nitish Kumar :

Well who does not want to show case their work & get applause from the crowd, this playground was based on the same concept, like this:

This time Nitish had the plan to encourage people around our community that’s why he have planed this playground because appreciation for our work from the crowd is also really motivational & of course these creative fellow have done it really well & we were really amazed from their work.

“Have a Talk” by Varun Soni & Shweta Rawat :

Communication is really important and that was also the whole so purpose of our Dribbble MeetUp that’s why Varun & Shweta have hosted Design Talk (Have a Talk), to reducing the communication gap between us, we have talked about New Technologies, Design Trends, Reading, Writing and a lot of things, this is how we indulged in the talk.

We were so indulge in the conversation that we have not realised that when the time have paced through, every attendee had his appreciable and different Point of View.

Well its our favourite “Analog Playoff” Playground, In which every attendee has took an hand on sketching and its a kind of free style sketching, and some of them was just masterpiece and there was an another surprise 😀 now hosts will not rate the attendees, instead they had to rate others sketches by sticking a golden sticker on their sheets.

And we had our winner also by the votes of other attendees and he was “Yunus Khan“, who won the Dribbble Invite as a Reward.

And there were a lot of surprises to be came 😀 after our last but not the Least Playground:
“Draw with a Blaze” by Shweta Rawat & Tarun Kaushik :

Like the name suggests us Draw it fast or “Draw with a Blaze” in this playground our hosts Shweta & Tarun announced 20 words and the attendees had to draw each word in 15 seconds and at the end each guy had to rate his neighbour that the icon or the drawing is recognisable or not, wasn’t its surprising again? 😀

And this time we had couple of winners actually it was a tie both guys have scored 20/20 on drawing quick icons and there name are Vishank & again Yunus Khan.

Well other Attendees have also won some goodies and chocolates.
And the time came when we have announced other Dribbble Invite Winners, so here they lucky people are:
Yunus Khan, Pooja Jain, Kuljeet Chuadhary, Rahul Rai, Abhinav Agarwal, Parveen Yadav & Jatin Aggarwal :

A big congratulation to these attendees, they really deserves this !

And at the End we had to some up this event with some really beautiful Memories: