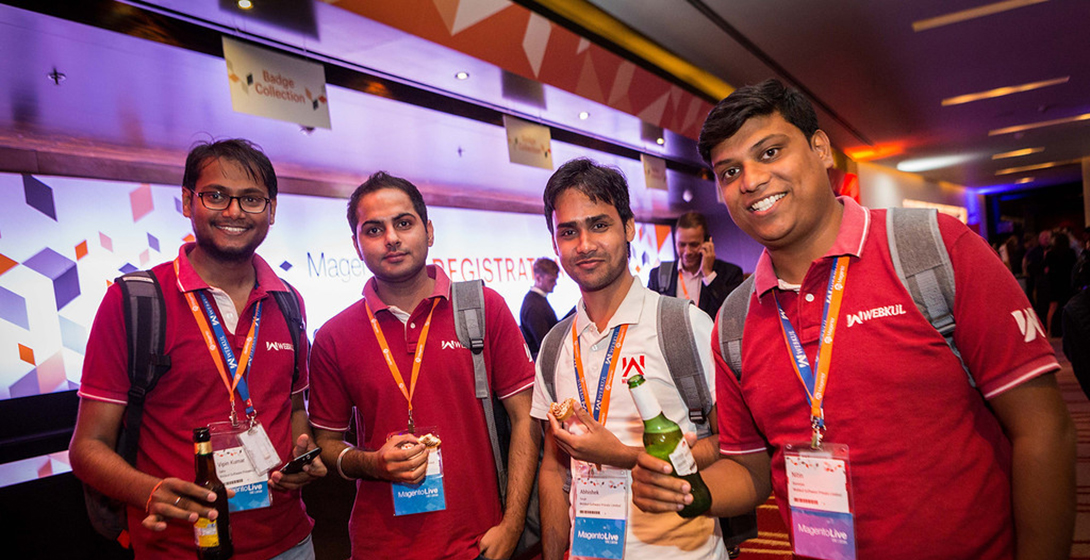 So starting with the event details as Magento hosts a MagentoLive event every year in UK and it was the 5th MagentoLive in UK at Park Plaza Westminster Bridge London. The event is organised by the Magento and partner companies to share the knowledge, innovative ideas and plans for the future. The Hashtag for the event was #MLUK16 an it was very popular in the social media platforms like Twitter and Facebook.

This year we Webkul went to UK to attend the MagentoLive UK with a team to explore the opportunities and grasp the knowledge about the partner companies for the transformation of the commerce industry based in Magento and to add more and more valuable extensions for the Magento community.

We reached the Indira Gandhi International Airport on to get the flight and everything was fantastic and according to the plan. We were uploading picture and doing tweets for the events.

Day1- 19/06/2016: After a 10 hours pleasant flight we landed at Hethrow Airport London the most busiest Airport of London and our Hotel was in the “Elephant and Castle” near “Westminster bridge”. We took a Black taxi from Hethrow Airport to Our Hotel “Eurotraveller” it took 1 hour to reach the hotel after reaching our hotel room, we were restless to roam around the streets of London. We searched for the restaurants near us. The food was delicious and everyone loved that. Now we have a whole day to walk around the street and explore the city.

After a tiring day we reached the hotel and taken rest and also we have planned a meeting with 1 of our client of Magento Marketplace Multi Vendor module. The evening was more interesting when we had a great talk with our client and had dinner with him.

Day2- 20/06/2016: The Day has came when we need to dress up quickly to reach the Venue Park Plaza Westminster Bridge where the MagentoLive is going to start.

We reached the venue in time and we have done with the registration. The schedule of the events were in our mind as we have planned accordingly about that. The schedule was as follows- there was a breakfast and then followed by various general and breakout sessions. There were many partner/sponsor companies who have set their stalls at the venue.

There were many peoples with different industries connected to Magento. We met with Mr. Ben Marks after a general session and discussed about various important things.

Also we met with Mr. Max Pronko and discussed about Magento 2 extensions and modules.

After that we met various Magento officials in a row. Many of our existing customer are there with whom we have discussed about implementing new and innovative things in our existing modules.

The last event of the conference’s first day was in”All BAR ONE” where the UAEF is going to be telecast and everyone was super excited about that. We attended the party and met Mr. Mark Lavelle the CEO of Magento, we have discussed many things with him as well.

The day was memorable and now we have plans for the second day of the conference.

Day3- 21/06/2016: It is the second day of the conference and it is the last day as well, so the conference is going to start early morning by 8:00 we reached the venue by 8 as we are very punctual and the first event was the breakfast where we experienced that people know us very well. They were joining us for the breakfast and we were discussing about many innovative and productive ideas.

The breakfast was followed by back to back breakout sessions, where we Webkul team was divided to attend all the sessions to grasp more and more about the innovative ideas. The events in the second day was way more knowledgeable and some of the sessions were half done in the 1st day and now they are going to be concluded, so we were excited about those as well.

Magento launched its cloud platform in a general session which was the best moment for everyone to be a part of the launch event of the Cloud platform.

Success Stories of Brown- Foreman and Fraport was discussed in a general session and that was one of the best and innovative session of the conference. Also Magento launched its new product for the order Management to simply the management of orders.

We in the Second day of the conference met with many officials in a row Like Mr. Product Paul

Meeting with Magento officials was a fantastic experience as we were grasping knowledge about the new and upcoming plans for the Magento community so that we can also be a part of that by building the beneficial extensions for it.

Also we met our Client in the second day as well, Mr. Elio Ermini one of our valuable client.

Now the time has came when the MagentoLive conference is going to end, we attended the last event which was the cocktail event. We enjoy the party at its fullest with all the attendees of the #MLUK16 it was amazingly great conference.

We left the venue and went for shopping center at Elephant and castle. The shopping experience was good and we Webkul team have spent some of our memorable time there at the time of shopping.

After that we went to our hotel and taken rest for sometime and after that we walk-down the street to have our dinner.

Day 4- 22/06/2016: The last day in London. We are packing our bags as we were having our flight scheduled in the evening so we planned to pack our bags and then we went for a Joy ride in London eye the best part of London.

We went the ticket window and seen a long queue, Yes that is the obvious thing as the London eye is the biggest attraction of the city. We bought the tickets and then we were added in the queue.

It was a great experience as it was our first time to visit the place and after 20 to 25 minutes we got out chance to board on a large capsule it was an amazing experience and at that time our cameras were all over to capture each and every moment. The half an hour ride was i think the best moment of our London trip.

We de-boarded the capsule and now we were determined to reach our hotel and collect our bags to head towards the Heathrow Airport.

We spent a memorable as well as knowledgeable time in London and we are now planning many innovative ideas to be implemented so that we can make many more beneficial extensions for the Magento Community.